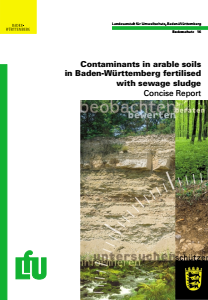 The aim of this study was to establish if the entry of contaminants into the soil through the application of sewage sludge may lead to a demonstrable increase in their levels in the soil. The main outcome of this study has been a demonstration of an accumulation of contaminants in the soil at 3 out of 11 agricultural field locations and 2 experimental study locations as a consequence of many years of application of sewage sludge. Higher concentrations of organotin compounds and polycyclic musks, as well as copper and zinc, were found at the 2 field locations to which the highest quantities of sewage sludge had been applied. The concentrations of organotin compounds and dioxins (PCDD/PCDF) were significantly elevated at 1 further agricultural field location. The experimental study locations were found to have higher levels of the above substances and, in addition, of cadmium, lead and mercury, as well as PCBs, PAH and DDT. A further point is the apparent high persistence of the organic compounds in the soil over a relatively long period of time since the last sludge application  up to 14 years. The heavy metal concentrations at the experimental study locations lay both above and below the precautionary values laid down in Bundes-Bodenschutz- und Altlastenverordnung BBodSchV. The values for the agricultural field locations were below the precautionary values. The extended German version of the study titled  Schadstoffe in klärschlammgedüngten Ackerböden Baden-Württembergs" is published as issue 14 of the Book Series Bodenschutz from LfU and is also available in this shop.