Official examination of potential contaminated sites according to § 9 Para. 1 BBodSchG 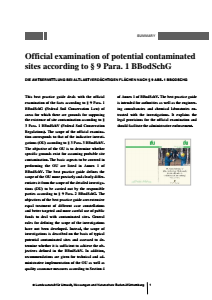 This best practice guide deals with the official examination of the facts according to § 9 Para. 1 BBodSchG (Federal Soil Conservation Law) of areas for which there are grounds for supposing the existence of site contamination according to § 3 Para. 1 BBodSchV (Federal Soil Conservation Regulations). The scope of the official examination corresponds to that of the indicative investigations (OU) according to § 3 Para. 3 BBodSchV. The objective of the OU is to determine whether specific grounds exist for assuming probable site contamination. The basic aspects to be covered in performing the OU are listed in Annex 1 of BBodSchV. The best practice guide defines the scope of the OU more precisely and clearly differentiates it from the scope of the detailed investigations (DU) to be carried out by the responsible parties according to § 9 Para. 2 BBodSchG. The objectives of the best practice guide are: extensive equal treatment of different case constellations and better targeted and more careful use of public funds to deal with contaminated sites. General rules for defining the scope of the investigations have not been developed. Instead, the scope of investigations is described on the basis of typical potential contaminated sites and assessed to determine whether it is sufficient to achieve the objectives defined in the BBodSchV. In addition, recommendations are given for technical and administrative implementation of the OU as well as quality assurance measures according to Section 4 of Annex 1 of BBodSchV. The best practice guide is intended for authorities as well as the engineering consultancies and chemical laboratories entrusted with the investigations. It explains the legal provisions for the official examination and should facilitate the administrative enforcement.